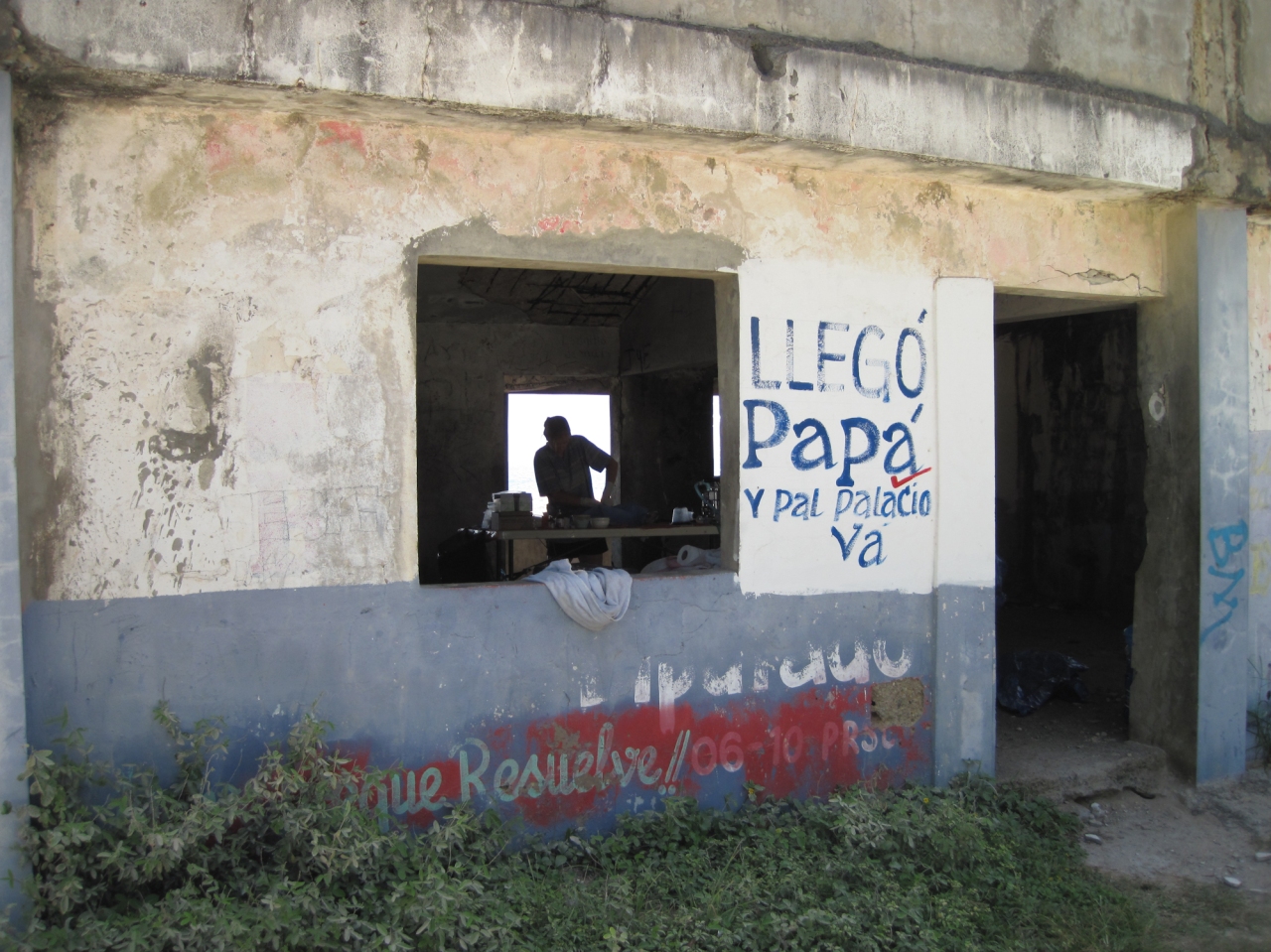 I went to the Dominican Republic for several reasons.  First, my friend Connie moved there several years ago.  She is very active in the animal welfare world, working for In Defense of Animals in the Portland office when I was still living there.  My favorite Connie story:  streaking through the World Cup soccer match with a friend- both wearing only a pair of tennis shoes to protest the company’s use of animal products in those shoes.  Did I mention she was 50 at the time?  She and her husband Steve moved to Cabrera on the north coast of the DR after going there to volunteer with Animal Balance (a wonderful non-profit with whom I volunteered in the Galapagos Islands in 2006) for a spay/neuter project.  There are many, many street and beach dogs there.  They do have a agriculture veterinarian in Cabrera, and he very generous and does as much as he can to help, but his major effort is with livestock.  So I had been intending to go and visit, most likely at the time of an Animal Balance campaign, but it had not worked out so far.

Second, I like to travel and any reason is a good reason to visit somewhere new and beautiful!

The tipping point, though, was a conference in La Romana on the southeastern coast of the island.  It was an International Living conference on real estate investments.  Mark and I have used our 401K monies to invest in a retirement condo on the coast of Ecuador, and the builder/developer as well as the local attorney were to be at the conference.  Additionally, I am always looking for a place to live next that has all things we like about Hawaii with less of what we don’t like.  So add on a trip to Las Terrenas after the conference…  perfect!  See the whole island, help a bunch of animals, visit my friend, and do a little business…  Arrangements were made, supplies were purchased, and off I went.

Traveling from Honolulu to Cabrera is quite the adventure in itself.  Honolulu to LAX.  LAX to NY Kennedy.  Kennedy to Santo Domingo.  Taxi to the bus station.  So far so good.  The bus station was the first real challenge.  I have known Spanish numbers since I was in the second grade, and although I in no way consider myself to be fluent in Spanish— numbers I know.  Or thought I knew, but the Dominicans have a very odd variation of Spanish which seems to leave out many of the letters.  So eventually I figured out that they do NOT take US dollars.  And I managed to exchange money after a very helpful local pointed me in the right direction while helping me lug around my 2 large bags and one large dog kennel full of supplies!  I was still forced to use my father’s tactic for foreign currency:  hold out your palm full of money and let them take what they like.  You never really know if you are getting screwed or not, so just assume it is all good.  Then stand and watch the signs go up and down for the different places.  Turns out your bus is NOT at the right stall…  but again, another very helpful local keeps an eye on you, asks where you are headed, shows you the right bus, and helps to lug all the supplies to the bus. Next task:  finding your stop.  You know you have to cross the island, so when you start to see beach on your right, you look for signs.  Connie has told you what to look for.  The passenger next to you has tried to converse, but again the lack of letters in the words or at least reaching your ears precludes understanding.  Luckily she did figure out that I was headed to Cabrera and told the driver, so while stopped at the side of the main road at a gas station the driver asks ‘Cabrera?’  I say ‘si’ and he points for me to unload.  Now my supplies and I are on the side of the road.  I drag them to the corner and wait for Connie.  Of course my phone does not work.  Verizon, hmmph.  After an hour or so, I figure that I have to do something.  So I ask (ok, mime) one of the many staring locals if I can borrow his phone.  I call Connie, who has been waiting for me 4 blocks away at the bus station!  The nice guy turns into a bit of a stalker, calling Connie for the next few days, but she set him straight.

Off to my hotel to unpack and then to get a bite to eat.  Then it is time for some much needed sleep.

Nice house across the street. The entire peninsula behind is a compound owned by an internet millionaire.

View from my porch

View up the street from my other porch

Connie has arrived to pick me up

First thing the next day:  organizing and setting up the clinic on Connie’s back porch.  I also met my new most treasured person- Irma.  Irma and her significant other JP and their daughter Mika moved to Cabrera a few years earlier.  Irma helps Connie and helps Animal Balance and generally does all she can to help find homes for the dogs and organize logistics for campaigns.  She also drove me around everywhere, picking up dogs before and after, and took me to the beach to cool off or to her house for a swim in the pool and a chance to do laundry each afternoon.  Of course, laundry is only possible if the power is on.  The power there is so intermittent that all the houses of people who can afford such have battery banks and an inverter so they can at least have lights available 24/7.  As we were setting up, a call came in about a Chihuahua in labor having trouble.  A quick exam and palpation revealed a puppy head much too big to pass through her pelvis, so we hurried to get oxygen and anesthesia set up and a c-section was performed.  One big puppy.

Connie and Steve’s nice porch – before…

Steve in the kitchen

Our first patient, a dystocia

The reason why – only one quite large puppy!

We finished getting everything set up, and headed to Playa Entrada to feed and deworm the dogs, as we were planning to have a clinic at the beach later in the week and we wanted them healthy and able to be caught!  We then spent the next few days doing surgery on the porch and seeing health appointments in between surgeries.  Connie and Irma were great with handling the dogs, and Irma became quite a proficient technician.

Connie and all her dog friends- she feeds them regularly so they will all approach her.

Playa Diamante- we fed 2 dogs here, but never could find them again to catch them.

Surgery on the porch with Irma’s amazing assistance

Who turned into a curious client!

I also looked around Cabrera and the environs a little, and we went to a school’s fundraiser- a fashion show!

another street in the town

Locals will carry live chickens, pigs, and even this mattress on their scooters!

A newer developing part of town behind my hotel.

Which had quite a few horses wandering about

Mostly free-roaming or with a short neck-rope

Playa Grande – the water was SO cool and refreshing after a hot sticky day!

Many cute outfits- I only bought one thing!

For our last big effort, we hauled all of our supplies and set up in an abandoned (and very very dirty) building at Playa Entrada.  It is so sad that such a lovely place has SO much trash just piled up.  Connie has been feeding all the dogs, so between her and a few locals, we were able to catch most of the dogs.    We had visitors wander in and out, and tried to gently educate them about what we were doing and why.

Our clinic for the day.

View of the building from the beach.

Looking down the beach.

Looking up the beach. It really is just amazingly beautiful and empty- few people and NO development.

Setting up for surgery

Come on out! We have a little treat for you!

Puppies eager to eat and even help with retrieving the food from the cooler.

View from the window (just don’t look down in the corners!)

One of our many visitors.

Although it took some shuffling to be comfortable.

Scruffy pup hanging out with a larger dog. They really liked to stay, returning and crawling into a kennel even after we set them loose outside the building!

As a treat on one of my last days, I hitched a ride with Irma to Cabarete as she had an appointment in a Sosua.  This is a town about an hour up the coast that is famous for surfing, windsurfing and kiting.  They have international contests at a beach nearby.  It is the off-season, so things were quiet and pleasant.  Even the locals peddling jewelry and massages were very courteous and did not hassle you.  The next day we hit some more sights close to Cabrera- DuDu lake and the Blue Lagoon.  It must be mostly limestone in the area, as these cenote look very similar to those I’ve seen in Mexico.

Off season, the beach is really empty.

Cabarete is along a nice big bay.

Upscale hotels and condos for the international set

Plenty of boards for rent

The ubiquitous dog on the beach, though I can’t say it is a good place for such a furry chow!

Nice housing along the streets fronting the beach

Neighborhood dogs out for a stroll down the main road.

Cute shops and cafes on a walkway to the beach

Entrance to the Blue Lagoon. Good thing I wasn’t packing my Hookah!

There are several cenote, this one being quite large and open.

With best wishes to Irma, Connie, and Steve, I boarded the bus with much less luggage and traveled back to Santo Domingo to continue my trip.