On Martin Luther King Jr.’s observed birthday and a nice very hot Monday off from work, a group of us hiked down to Massacre Bay from the village of Aasu.  The village used to be at the bay, but then the people all moved up to the top of the valley.  It was empty for many years, but foundations from the village remain.  Currently one couple lives in the bay.  It is part of Samoan land ownership rights that the area must be lived in continuously for certain number of years in order for it to stay in your family.  If left uninhabited for a certain amount of time (maybe 20 years or so), other families can move in and claim it.  That is the jist, I’m sure I am not exactly correct.                 (*click on any picture for a slide show!*)

Looking down the Aasu valley and across the island from the start of the hike. 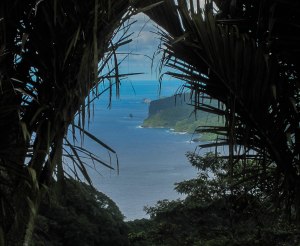 The coastline of American Samoa is rather dramatic!

Scenery along the hike down.

Massacre Bay. Spectacular and I have to admit that we felt pretty lucky to be in such a beautiful place with just five friends!

The water is amazingly clear. There was a swell coming in, so the current was very strong through the channel, limiting where we could easily snorkel. 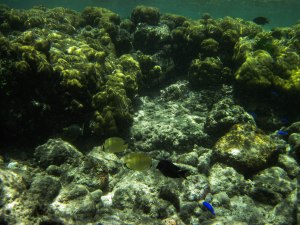 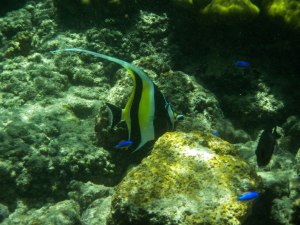 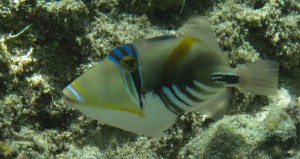 Humuhumunukunukuapua’a. State fish of Hawaii. Or you can call him a trigger fish if you must…

Sea cucumber. These are plentiful in the secluded bays, but over-harvested in the easy places. The governor passed a moratorium last year to prevent decimating the population.

Kelley, my favorite marine biologist and finder of many things amazing in the ocean. She is also my very helpful neighbor who lets my scared dog hide in her bathroom during thunderstorms and looks after the pets while I am away!

Squid!! They are apparently rare to see here (Kelley was very impressed that I saw one!) 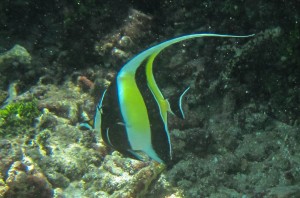 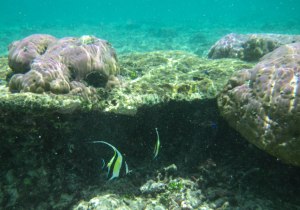 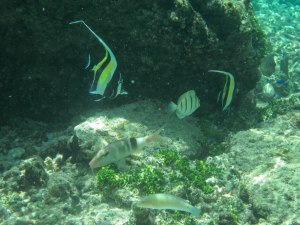 There are so many really amazingly colored fish here, many that I have never seen before.

Some sea cucumbers emit these sticky tentacles when they are pestered. I was not the one to harass it! But it is startling that they can do this. 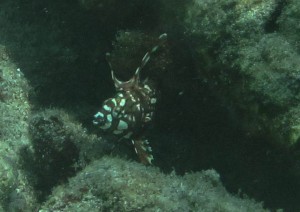 Juvenile fish. Sort of looks like a lion fish, but he was very small.

Leaf floating on the water surface. It was very clear in the protected areas, but most other places it was stirred up because of the incoming north swell.

Memorial for the French who died here. From Wikipedia: The bay was the site of a battle in the eighteenth century between French explorers and islanders in Tutuila, for which the Samoans were blamed in the West, giving them a reputation for ferocity, and from which the bay gets its name. The story roughly goes that there was a misunderstanding and the frenchies killed a local boy. The Samoans retaliated. Guns win over sticks and rocks. Many more Samoans were killed than French, but the French have a monument.

Hikers back up at the beginning of the trail. It was a VERY hot day, but rain clouds moved in and we were happily soaked by the end.