Waking up and having a last hot shower… aaah.
We sat down to breakfast and started to introduce ourselves..
‘Talofa!’
What?
Turns out that Dr Bruce was on staff at the  LBJ Medical Center on American Samoa in the 80s. He also sailed and worked on Rarotonga and in Tonga. He knows Manu’a and Michelle who own the Tutuila and Manu’a stores. He now lives in China with his wife. Interesting guy, so we chatted and didn’t get out until… 10. Typical!
Off to the post office with our extra items to mail and/or donate to the hiker bin. Back to the trail and on our way south! 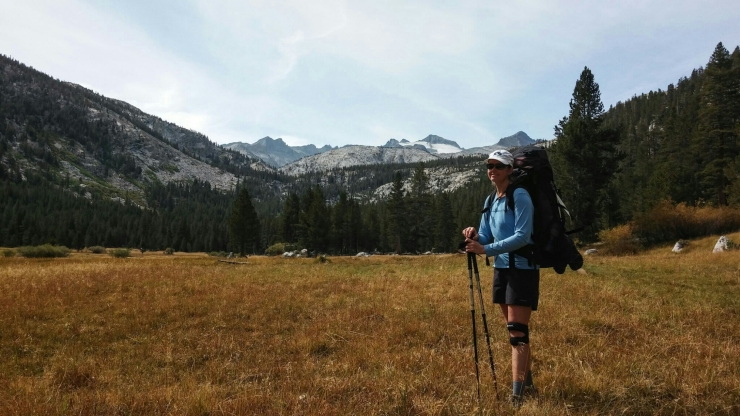 Towards the end of the valley before starting uphill, we set up camp across the river. There was a nice (freezing cold) swimming hole in the river bend. The sides of the canyon were high ridges, and it was cold enough to freeze water in the filter overnight.

We saw haze in the evening from both directions… our first real signs of the fires burning to the south and to the north.

Up and on the trail by 10:30 as usual! We continued up the Lyell Valley and saw nice wildlife all day. 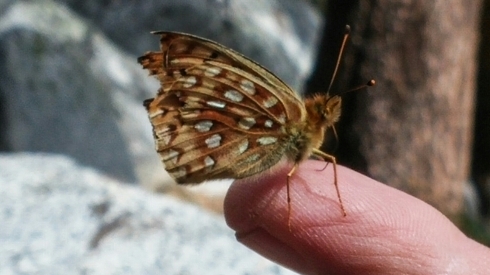 Up to the junction of 3 creeks, over the bridge, then up to a lovely lake for lunch.

As we were leaving the lake to head up to the pass, we found a set of maps in a nice waterproof bag. The list of planned overnights as well as resupply locations were listed as well. We picked it up hoping to find the owner, but never did though we asked around for 2 or 3 days. It ended up being a blessing as I had intended to type notes into my phone each night ~but~ the solar charger I bought really didn’t work… So I used these map backs as journal paper! Tim was happy since he didn’t want me drawing or writing on his map set. (We also found one shoe and two tent stakes on our walk today.) Up a big switchback with a napping marmot to another lake and then up 4 false summits to (finally) Donahue Pass at 11,056 feet. 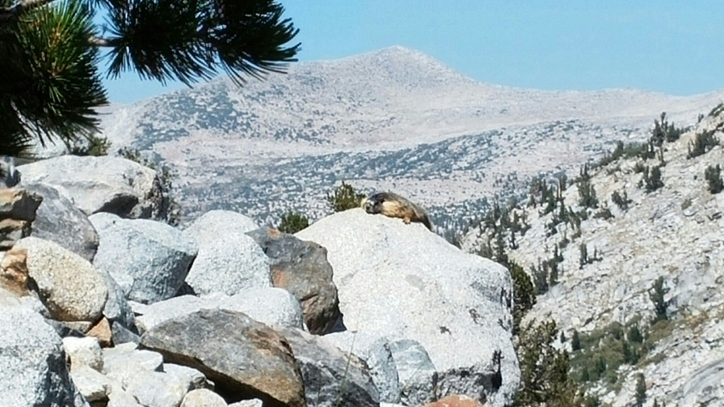 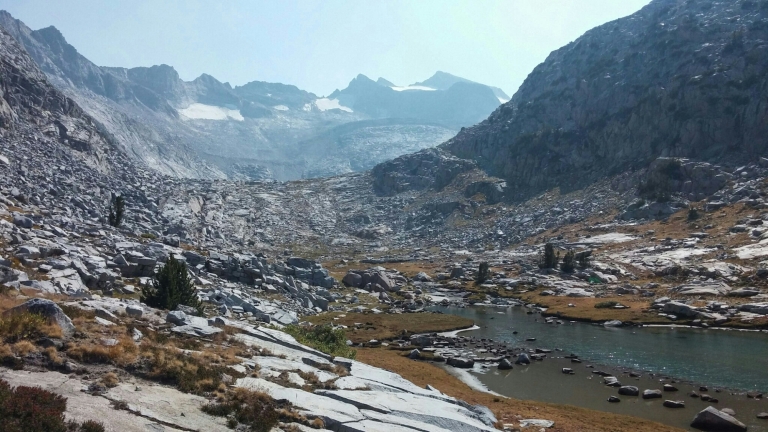 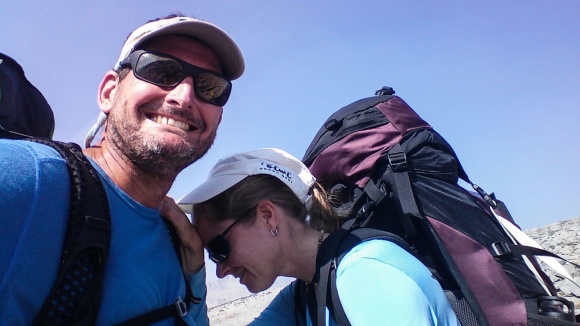 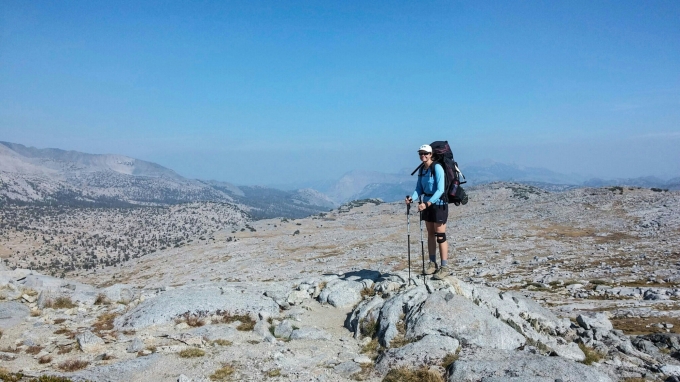 We hiked down to treeline, a bit past the Marie Lakes junction (where there were camps all over right along the trail), across and down the river to a lovely spot with views down the valley and set up camp. 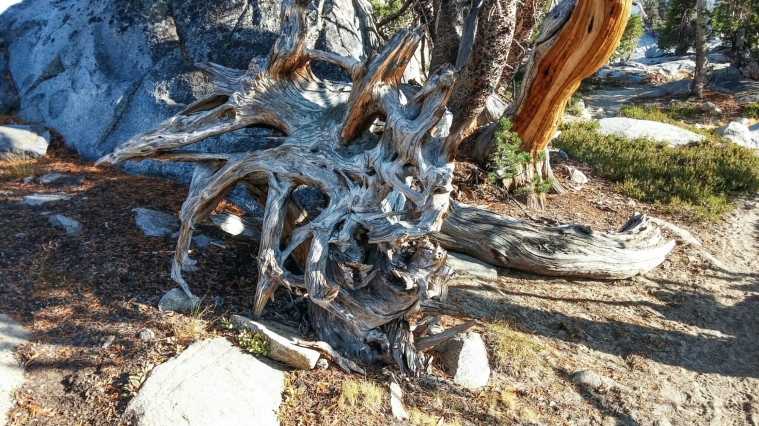 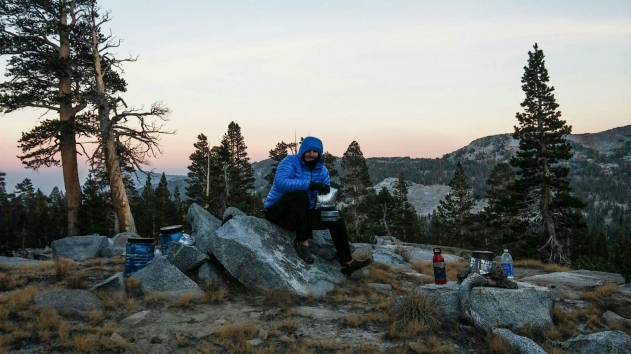 Mornings are still quite cold, and we tend to wait until the sun is on us before emerging from our sleeping bags! 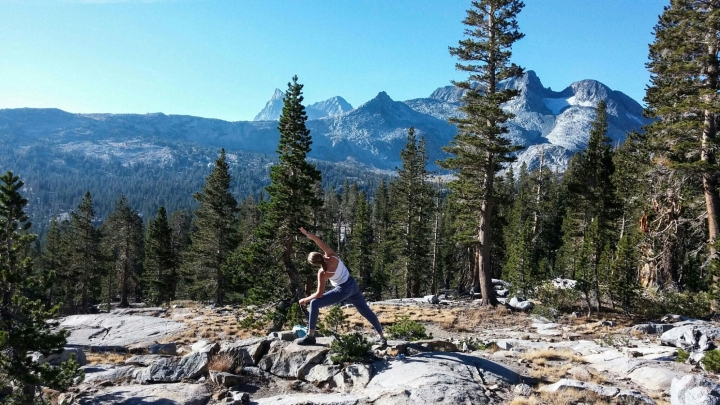 We ate breakfast, packed up, and headed down our side of the river. We hit a bit of a cliff and had to scramble down alongside a waterfall. It was a lovely fall, and steep enough for me to need to hand my pack down.

We joined back up with the JMT and headed over Island Pass (10,205 ft). We lunched at a nice lake at the top of the pass and chatted with a pair of guys who were on a loop hike over the ling weekend. They were exclaiming over Island Pass, which made us laugh since Donahue was so much harder!

Along the trail today, we came across quite a few people doing trail maintenance with a group called CCC. The California Conservation Corps was established in 1976, and trail maintenance is one of their projects. As we neared Thousand Islands Lake, we also saw quite a few groups including one of 6 men in their 60s who were headed off trail behind the Banner/ Ritter mountains on the Sierra High Route. We followed along the NW side of the (huge) lake and set up camp. It was very hazy to the south from the fires now burning in Yosemite. Tim wasn’t feeling too great, and actually went to bed without dinner!